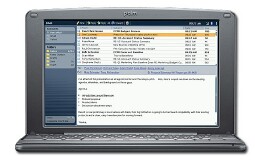 So Jeff Hawkins and Palm have finally revealed the awaited Hawkins device that is called the Palm Foleo today. We've been waiting and wondering and now we know the details.

Naturally, the news is spreading all over the internet on the tech sites today. Let's take a look at the many sites that are reporting on the Foleo:

If Palm didn't jump the shark with the Treo 755p, the long-awaited, yet meager update to the Treo 700p, this new device certainly qualifies as shark-jumping material.

Jeff Hawkins made it perfectly clear that Palm is not trying to make the Foleo a laptop replacement. It is meant to be a companion to your smartphone. He said people want to see more of their webpages than their Treos can show, and also want to see more email. Jeff Hawkins said if you're not into email, the Foleo is not for you (kinda surprised he'd say that). It sure looks like it's trying to be a laptop replacement to me.

What's cool about this "mobile companion" device, which Palm claims is the first of its kind, is that edits made on Foleo automatically are reflected on its paired smartphone and vice-versa (via Bluetooth).

We just got our grubby little paws on that new Palm Foleo. We'll give you one guess about what we think. Ok, ok, look, it's an interesting device and an interesting concept, and we're long-time Palm fans. We like the scroll wheel, the keyboard and screen were very nice, and the browser works excellently (and with Flash! see the gallery). It's wonderful that it works so well with your phone and all of that business, but we just can't get behind this one. We need a better Treo, or we need a Foleo or like device that replaces your Treo -- we don't want both. No ifs, ands, or buts. We already have a laptop, and when you consider the fact that this thing is about the size and weight of a Dell X1 (ok, maybe a little larger), the user just doesn't have a whole lot of reason to take one of these home. Ah whatever, Palm never listens to us anyway.

So the big news here is that the Foleo utilizes Linux as it’s core OS. That’s pretty neat because that opens up the platform potentially to armies of open source developers. In fact, Palm’s press release states that it has “opened its design and is actively supporting third party software developers.” OK.. that’s a good sign folks. According to Palm, installing software could be as simple as downloading them via the web browser. Sweet.

The Foleo is actually the third recent stab by a mobile phone maker at hitting the low end of the laptop market.

Since the Foleo isn't a full or heavy OS-laden computer, it provides the advantage of "Instant On" capabilities. I see it a nice way to view and interact with your Palm data or use with your phone's connection to browse the web on a larger screen for up to five hours on a battery charge. Additionally, you can use it to browse pictures, provide presentations and more.

My initial thought: very innovative and it will appeal to Palm Treo owners. Will it appeal to the UMPC market? The keyboard is there, but the computing power and the inability to run a multitude of every Windows apps leads me to a limited UMPC audience. Thoughts?

Avid readers of the Treonauts blog will note that the Foleo device concept closely resembles a vision that I first outlined nearly three years ago in August 2004 with a post entitled Treo PC & TV: The Race is On in which I argued that our Treo would in the future be combined with a full-size monitor and keyboard to more effectively replace the need for a PC.

I'm really scratching my head over this one. And I love Palm. Love. I've been resisting the move to faster, sleeker phones because I had faith: Palm would pull one out that would surprise us all. And they did, but not in a good way.

Finally, the “Hawk” has taken flight… right into a power line.

Essentially, that sound you hear is Palm’s stock dropping through the basement. Let the takeover rumors begin!

Foleo is simply too limited in its use: It doesn't have a hard drive, runs the Linux operating system and falls into an in-between space, being larger than a phone and smaller than a laptop. The device basically just adds to the gadget clutter that users want to free themselves from, say analysts.

"I think this is going to be a massive failure," says Todd Kort, principal analyst with research firm Gartner. "The device is simply too big, too heavy to be carried around, and I think there are going to be better phones and laptops that will fill the need in a more sophisticated way."

Hey, I can certainly understand the concept and thought behind the whole project (what smart phone owner hasn't wanted a bigger screen or keyboard), but do I think it will fly? Not so much. My smart phone and laptop pretty much have me covered at all times. There's not enough there to compel me to carry another gadget just to get a little more screen real estate and room to stretch my fingers. But that's just me.

I think Palm recognized some really important needs and usage stats that would really improve the next Internet Tablet experience.

1. Sync with the device - This is crucial for the next Internet Tablet, in my opinion, if they're going to become consumer devices at all (which, frankly, is where I see that genre heading). This is why I use Google Reader for RSS. No matter what device I pick up, I'm at the same place I was when I left the last one. Whether this is synced online or through BT, it's crucial for things like web browsing, email, and PIM functions.

2. I like the design, plain and simple. Watching the webcast, and hearing Jeff explain why they did every little thing was nice. I wish that Nokia would do that on occasion. I'd love to know why certain design features were implemented how they were.

The usability of the device isn't a question. I can 100% see how the Foleo would be usable and completely beneficial.

3. It's marketed wrong. They should have marketed it as a Linux Laptop under a completely different company name. I would surmise that the press wouldn't have been so critical.

Many pundits are panning the Foleo as little more than a screen and keyboard for the Treo and, at some future point, other smartphones. Turns out, this is precisely Palm's intention with Foleo. But the company's over-hyped marketing has left Treo followers feeling deflated. Indeed, a new category of mobile computing the Foleo is not.

Still, Foleo deserves a little more credit than it's getting in most of online reviews. Don't underestimate the value of a full-size keyboard and relatively large screen to mobile workers, particularly those of Baby Boomer age. For anyone over 40, typing a meaningful email with your thumbs into a tiny screen is tricky for any extended period of time. Tricky enough for you to turn to your laptop as soon as possible. Not having to pack your relatively large laptop on your next road trip may well justify Foleo's $500 price tag.

Palm believes that users are willing to give up some of their power to get something that can easily be taken with you, without having to hunt for a power outlet nor bust your back carrying it around. The Palm Foleo is just this device, and coming in at under $500 (after the $100 rebate) I believe that it is going to be a big hit.

Palm announced their Foleo mobile companion device yesterday and most every blogger I read over the last 24 hours does not like the device. I actually am thinking about it as a possible future purchase since I think it takes the Nokia Internet Tablet idea and makes it better with a larger display and a keyboard. With the integrated WiFi you don’t even need a smartphone to use the device, but the multimedia functionality is still an unknown. I think if it was priced the same as the N800 (US$399) it would probably sell quite well, but with a full retail price of US$600 then that may push it too far out of people’s comfortable price range.

Lot's o'chatter today about Palm's new toy. Sounds to me like what Microsoft's Origami/UMPC should have been: light, focussed, inexpensive, instant-on.

In many ways, it tries to solve the same problems as the Nokia 770/N800 line -- but in a more conventional form-factor (i.e., it has a keyboard). Hopefully Palm can encourage a lively developer community at least as strong as Maemo's.

I was really excited to see the new Foleo from Palm, yet the Intarweb consensus is that it is DOA, underpowered and overpriced and why bother when you can buy a laptop? A typical comment on Gizmodo is "If you buy one of these its like carrying a big I'm an idiot sign" but as someone who still has a Palm Pilot 5000 on my bookshelf and can't go out the door without my Treo 650, I am going to say why I think this is big, perhaps the ultimate lean green machine.

So here is a machine that will let me connect to the internet either on wifi or through my Treo, let me work on a decent keyboard and screen, is all flash memory so it will suck very little power and run for a long time on batteries, for only five hundred bucks? Where do I line up?

Of course everyone isn't thrilled with the Palm Foleo. Many are but some aren't at all. There's a nice mixture of different opinions in the links. You get the "good", "bad", and the "ugly".

As for myself, I haven't totally decided yet. I love the idea of a big screen and a full sized keyboard. And Opera 9 sounds great too. I really like the idea of instant on and off. But.... I just don't read my email all that much on my Treo. I do surf the web occasionally, especially since I recently got an unlimited data plan. If I was a heavy Treo email user and surfed the web more, I might think about buying the Foleo. But to me, that's a lot of money to plunk down when I already have two laptops and a UMPC device. The Foleo does spark that gadget freak flame in my heart though so I'm going to wait and see what future developments come about. And maybe, just maybe I would check my Treo email more often with a larger screen. If Palm were to drop the price of the Foleo, I might could see myself getting one. I do have a feeling that the Foleo is just the beginning of some exciting new things to come.

Be sure to stay tuned as TreoCentral's Dieter Bohn keeps us updated throughout the day with Palm Foleo news. And the TreoCentral forums are wildly alive today with Foleo posts. ;-)