treocentral.com >> Stories >> Business
Palm Announces "Recapitalization" and New Additions to their Board
Overview

Update: Notes from the Conference Call

Note: click any image for the full slide from the conference call. The original story and press release follows.

Much of today's conference call (which will be available here at 2:00pm EST) rehashed what was previously available in the press release. However, there were a few interesting notes that might interest the Palm community. Most of the financial details are above my head, but the major point seems to be that Palm is distributing most of its current "excess cash" to current shareholders, to the tune of $9 a share. Also notable is that Palm is going to be taking on more debt than they currently have (which isn't difficult, given that their current debt is zero), which Palm says is "the right capital for Palm on the right terms." 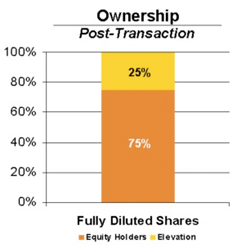 It's very tough for this non-expert to understand, but the combination of the cash distribution and the new debt seems to have two benefits: a reward to investors who've hung on during these tough times and a method for keeping those investors in the majority of shareholders (i.e. 75%). All of this is planned to happen during the 3rd quarter pending shareholder and SEC (thanks for the fix, samkim!) approval.

One exciting piece for the Palm faithful is that Palm is still in control of its own destiny. Elevation will have a 25% share of Palm, to be sure, but the executive team of Ed Colligan, Jeff Hawkins, et al will remain in place. In fact, the management team will become even stronger with the addition of fresh blood to the board of directors. More specifically, Jon Rubinstein was mentioned early and often during the conference call. His experience leading the iPod and iMac teams are a big plus for Palm. One notable quote:

He also lead the team that built the iMac and incorporated into Apple's products a pair of little known technologies that became commonplace as a result: USB and WiFi.

...Let's hope that USB (in the form of standard mini-USB plugs) and WiFi become "commonplace" in Palm's products, too. ;)

You all know that Apple's about to enter the marketplace with the iPhone and we have every reason to believe that's going to be an incredibly successful product. To us that's incredibly good news because it suggests that this is an opportunity to really bring software to the fore and really re-engineer people's expectations for mobile devices.

To Elevation's thinking, it won't be long before form-factor isn't going to be a major, well, factor for mobile devices. There's only so many ways that a small mobile device can be shaped, from a hardware perspective. It looks like Elevation is hoping that Palm will be able to catch-up to slimmer devices like the iPhone or the Motorola Q. Once that's done, Palm's new Linux-based PalmOS should, Palm and Elevation hope, put them ahead of the rest of the competition. McNamee explains (emphasis mine):

We've now hit the point, I think, where it's hard to make the devices smaller without giving up the functionality people need. That obviously was an issue for Palm - the company was out of phase from a product development cycle relative to the [rest of the] industry for the last 12 months. [...] Palm will close that gap relatively soon, at which point we think the game is all about software and we think software is the place where this company truly excels.

So, to sum up - Palm is indeed working on new form factors, is working on innovating on the software and user-experience side of things (where the action will primarily be in the very near future), and has a team of innovators at the head of the company. Palm is calling this a "Transformative Event" and I'd have to say that I agree. How long it will be before we truly see the effects of this transformation, though is anybody's guess. 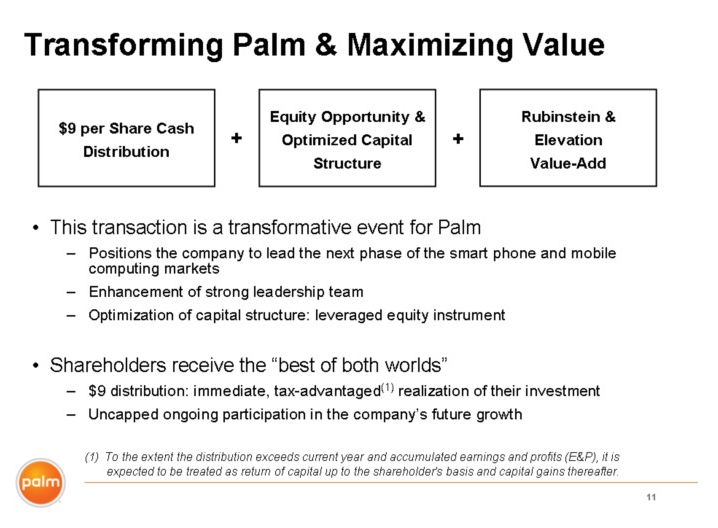 Discuss this article in our forums.

In a Press Release sent out this morning, Palm, Inc announced something very similar to what many have been expecting: a significant infusion of capital by a private equity firm, Elevation partners. As a part of the deal, Elevation will invest $325 million, Palm will further incur $400 million of other debt to use for capital, and shareholders will receive a distribution of $9 per share in cash.

Elevation Partners is a private equity firm, best known for being co-founded by U2's Bono. Although many rumors has Palm being bought out by a more well known company such as Motorola or Nokia, Palm itself has vigorously quashed those rumors in the past. Many expected a private equity buyout instead, but Palm has managed to keep its independence mostly intact after this deal, as Elevations's stake in Palm will be about 25% after the deal.

The investment is not that many industry analysts were expecting. The move appears to primarily leave Palm's management structure intact, although it does include a small shakeup to Palm's board of directors. Jon Rubinstein, formerly the head of Apple's iPod division, will becomes the new executive chairman of the board for Palm. Also new to the board, former Apple CFO Fred Anderson.

The relevant information from the press release is below, with emphasis added to what seem to be the biggest pieces of news.

SUNNYVALE, Calif., Jun 04, 2007 (BUSINESS WIRE) -- Palm, Inc., (Nasdaq:PALM) today announced a strategic relationship with the private-equity firm Elevation Partners ("Elevation") and a recapitalization plan that will position Palm to lead the next phase of the smartphone and mobile-computing markets. Under the planned recapitalization, shareholders will receive a $9 per share cash distribution. Elevation will invest $325 million in Palm, and the company will utilize these proceeds along with existing cash and $400 million of new debt to finance the cash distribution.

Upon closing of the transaction, Jon Rubinstein, former senior vice president of hardware engineering and head of the iPod division at Apple, will join Palm as executive chairman of the board.

Fred Anderson and Roger McNamee, managing directors and co-founders of Elevation, will join Palm's board of directors upon closing of the transaction.

"As a result of this transaction, we will strengthen the Palm leadership team and create a more effective capital structure, which puts us in a great position to attract new talent, significantly strengthen our execution capabilities, and deliver long-term shareholder value," said Ed Colligan, Palm president and chief executive officer.

Colligan continued: "Jon Rubinstein is one of the top engineering executives in Silicon Valley, and he will lead our product-development efforts. As a significant new investor, Elevation brings onboard unique partners and relationships, plus a long investment horizon. For shareholders, the recapitalization provides an immediate return on their investments and our shareholders will retain their ability to participate in the company's success and future growth."

"This is by far the largest investment that Elevation has ever made, which reflects our enthusiasm for Palm and its opportunity. This investment fits perfectly with Elevation's investment strategy of partnering with great management teams to transform businesses in industries with dynamic technology change," said Roger McNamee. "We see Palm as uniquely positioned to deliver the integrated software and hardware solutions that will drive the next generation of mobile computing."

Jon Rubinstein added, "I have tremendous respect for Ed Colligan, Jeff Hawkins and their team, and I am thrilled by the prospect of helping Palm deliver innovative products capable of transforming the mobile-device market. Approximately 1 billion cell phones are sold each year, and mobile computing is a category with enormous potential. This is a company with an impressive history of introducing game-changing products -- it pioneered the smartphone -- and I intend to help extend that legacy."

Under the terms of the recapitalization plan, Elevation will purchase $325 million of a new series of convertible preferred stock. The conversion price will be $8.50 per share, which represents a premium of approximately 16 percent to the implied post-distribution price over the 10 trading days ended June 1, 2007, excluding the $9 per share cash distribution. Upon completion of the transaction, Elevation will own approximately 25 percent of Palm's outstanding common stock on an as-converted and diluted basis, based on the number of shares of common stock outstanding as of March 30, 2007.

The company has secured commitments for $400 million of new debt and a $40 million revolving credit facility which is not expected to be drawn at closing. JPMorgan and Morgan Stanley will be joint bookrunners for these facilities.

The distribution represents more than one-half of Palm's current market capitalization and enables existing equity holders to retain nearly three-quarters of the post-transaction equity on a fully diluted basis. The company expects to have more than $300 million of cash on the balance sheet after the distribution.

The recapitalization is expected to close in the third quarter of the calendar year and is subject to shareholder approval, customary regulatory approvals including clearance under the Hart-Scott-Rodino Antitrust Improvements Act, and other customary closing conditions. A definitive purchase agreement has been executed. The board of directors of Palm has unanimously approved the purchase agreement.