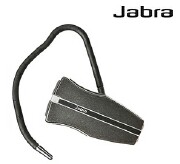 The infinite variety of Bluetooth headsets that abound never ceases to amaze me. For such a utilitarian function—enabling hands-free cell phone operation—it seems odd that so much ingenuity has channeled into perfecting and positioning these devices in what should be a glutted market. Not content to distinguish themselves on mere sound quality, attention to style among headset manufacturers has become paramount—hence the byline “Design by Jacob Jensen” prominently featured on the box of Jabra’s new version of their highly successful JX10. Whatever I lack in cultural literacy, it’s clear by implication that any industrial designer mentioned by name at all must be someone very important. 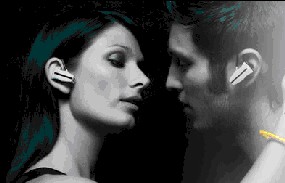 Priced higher than an average headset, like its predecessor, the Jabra JX10 Series II was clearly intended to compete primarily on aesthetic impact. Open the slick packaging (no blister packs here), and you’ll find a lot to love: a “Getting Started” quick-start guide (featuring a Jabra-wearing couple on the cover, imbued with mutual lust), a more complete user manual, a USB cable, an AC power supply, a car charger, the headset itself, and its desktop charging cradle.

I usually think device cradles are little more than ostentatious pedestals for making certain products appear more worthy of charging than their rivals, but this cradle is small and elegant enough in its own right to deserve its place on the desk. There was, however, no carrying pouch referred to in some of the product’s marketing materials. That aside, the entire contents of the box add up to a first-class presentation. 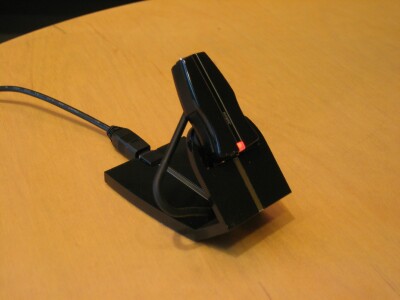 The headset and the charger have a high-gloss charcoal finish which, while very professional-looking, picks up smudges very easily. The color has a fine glitter to it that catches enough light to make any fingerprints instantly visible. You can’t touch these pieces without leaving a trace. I would have preferred a matte finish. You’ll either wind up wiping the headset and charger compulsively or not at all, giving up and just dealing with it.

The headset has a single status light: an appropriately small, multi-color LED mounted flush with the center inset. It pulsates blue in half-second intervals in active mode, and in three-second intervals in standby mode. A solid red glow indicates a low or charging battery, and a solid green indicates a full charge. The initial charge took less than half of the manual’s stated 2-hour period. The battery is said to yield 6 hours of talk time and 200 hours of standby time, though this should be a non-issue considering the full set of charging accessories included.

I’m not crazy about the tubular earhook. It doesn’t seem visually consistent with the body of the headset. But the main flaw, for me at least, is the pressure it exerts behind the ear, which is compounded by the unit’s eartip that’s just large enough to create outward pressure against the auricle and outer ear (i.e. the opening to the ear drum). After about 20 minutes, I found it painful to wear, though most user reviews don’t seem to share my discontent. Eargels might solve the problem if your ears are as fussy as mine to earbuds and eartips.

If you’ve been through several Bluetooth headsets, you might be tempted to skip the manual and plunge straight away into the pairing process by holding down the answer/end button. That doesn’t work on the JX10. It actually has a dedicated pairing button on the inward side, which you might even be able to see without a microscope. It took several tries to pair the Jabra with my Treo 755p, and there was no indication of why the final attempt worked and the previous attempts didn’t, since I followed exactly the same steps four times in a row.

Besides the pairing and answer/end buttons, the only other buttons on the JX10’s minimalist exterior are two volume control buttons on the rear, and a nonfunctional “button” opposite the answer/end button that mirrors the latter—no doubt for cosmetic symmetry, but functional symmetry would have been better. Since the adjustable earhook allows the unit to be worn on either ear, it’s easy to think that both buttons act as controllers, though only one is labeled with a phone icon. Once again, only reading the manual makes this clear.

The headset manages to work with so few buttons by enabling different functions with tap, double-tap, press, and press-and-hold operations, which impose an initial learning curve on the user. You tap the answer/end button to answer or end a call, or to turn on the unit; double-tap to redial; press—by holding down the button for about a second—to reject an incoming call or to activate voice dialing (if supported by your phone); press and hold to turn off the headset. I’d rather have a couple of extra dedicated buttons, even at the expense of svelte, sheer lines and surfaces. It’s easy, before fully memorizing these multifunction button operations, to clash with unintended consequences. Pressing the button during a call, for instance, puts it on hold or switches between two calls, but tapping ends the call. It’s a subtle distinction that’s easy to forget on the go, making it just that easy to hang up on someone you meant to put on hold.

The Series II adds multi-point support, meaning that you can use the JX10 with two mobile phones if you have the misfortune of actually needing to carry both during the day. Perhaps more practically, you’ll be able use the feature in conjunction with the upcoming Jabra Bluetooth Hub (sold separately), enabling the headset to be used with a mobile phone along with an office phone.

The incoming sound quality is easy to talk about. Hands down, this is the best I’ve heard in a BT headset. The midrange and high bass are balanced with the highs here better than most headsets, which sound hollow by comparison.

The outgoing sound quality was less than stellar, but I’ve learned to expect outgoing sound assessments to consistently worse, regardless of the headset. I usually talk to people directly from the Treo, so friends are used to handset quality, and they notice whenever the clarity deviates from this standard. Listening to myself on voicemail, it was evident that the Jabra was still better than other headsets on a curve, but still not handset quality (is this really too much to ask?). Talking in live rooms (those with hard walls) seems to produce the worst sound (which gets worse as the room size increases). Outdoor settings always sound fine, even on a busy street.

The attention to detail Jabra (or the legendary Mr. Jensen) paid to this product is commendable. The design, the build quality and the sound quality are top notch. The only reason I’m docking it 1 out the 5 points in the Overall Rating that I would otherwise give it is the physical discomfort I experienced after extended wearing. I suspect that anyone who wears headsets as permanently as wristwatches wouldn’t be affected by this—I’m still mainly a handset user that switches to hands free operation in selective contexts—but you’ve been warned. Otherwise, this unit is a winner.