Today Palm reported that their total revenue in the first quarter of fiscal year 2008, ended Aug. 31, was $360.8 million. Smartphone sell-through for the quarter was 689,000 units, up 21 percent year over year. Smartphone revenue was $302.2 million, up 12 percent from the year-ago period. 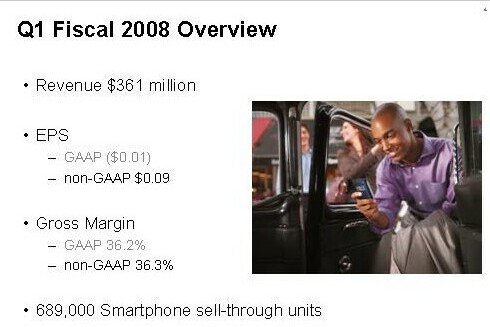 Okay, I don't exactly understand all the numbers in the press release. I mean, heck, my mind goes blank when someone asks me a mathematical question of any kind. I get the glazed over, "deer caught in the headlights" look in my eyes. And believe, they are glazing over as I'm typing this. But I do get that Palm's shares slumped nearly 4% to $15.38 in after-hours trading today following the earnings report. The stock is about 18% off its peak back in mid-March. MarketWatch said that Palm's forecast for the current period came in below Wall Street's expectations. Revenue for the quarter is expected to come in between $370 million and $380 million. But the Houston Chronicle said that excluding one-time items that included $5.1 million in stock-based compensation expenses, a $5 million patent acquisition cost, and $6.6 million in restructuring charges, the Sunnyvale-based company said it would have earned $9.7 million, or 9 cents per share. And then added:

On that basis, Palm beat Wall Street's expectations. Analysts polled by Thomson Financial expected the company to report adjusted earnings of 8 cents per share on sales of $360.3 million.

Analysts were previously saying that Palm would most likely continue to lose sales until new Palm products appear. And of course Palm just anounced the Treo 500v and the Palm Centro, so hopefully things will start looking up for Palm.

"The launch of our Palm(R) Treo(TM) 500v with Vodafone and the Palm Centro(TM) with Sprint in September demonstrate our commitment to delivering competitive, high-quality solutions and expanding our reach to a broader market and range of customers," said Ed Colligan, Palm president and chief executive officer. "As we move toward completing the recapitalization transaction with Elevation Partners, we are excited to strengthen our ability to accelerate Palm's growth in the future."

I know that Palm is up against RIM and Apple but let's remember that Palm is coming out with their new line of Linux OS Treos soon. I have an iPhone and yes, it's a wonderful device. It's one of the coolest gadgets I've ever owned due to the amazing Multi-touch screen. The iPhone is definitely "eye candy". But since I've had my iPhone, I've still been using my Palm Treo 680 97% of the time. Why? Because the Treo does all the things that I need it to do, and it does them with that "Zen of Palm". I can type sooooo much easier and faster on the Treo's keyboard. And oh how I appreciate that tactile feedback! I can cut and paste, and there is a crap load of 3rd party software to choose from. I do love my iPhone but I prefer my Treo. I believe that Palm can come up with lots more smartphone designs. I'm liking what I see of the Centro so far. I think this phone will be a hit with its features, looks, and the great price. And that $99 price could help Palm in its competition with the iPhone, which recently had its price lowered. I think that the majority of people who buy the Centro will be first time smartphone users and a large portion of the younger crowd. This phone would be perfect for my Mom but since she's on my family plan and I'm not with Sprint, I won't be gettin her one. I've read on the TreoCentral Centro forums that some Treo owners like the Centro and plan to get one for themselves or someone in their family.

Anyway, Palm has done some restructuring and announced their recapitalization back in June, hiring Jon Rubinstein, who previously served as senior vice president and general manager of Apple's iPod unit. Palm's results today largely fell in line with the guidance Palm gave last week. Speaking about Rubinstein, Oppenheimer's Lawrence Harris was quoted in The Washington Post as saying:

"The impact of his arrival in terms of a completely new design probably won't be felt for 18 months," Harris said. "It takes one to two years typically to design a new mobile phone or smartphone."

I'm going to keep in mind that this is just the first set of results since Palm sold 25% of its shares to Elevation Partners and cross my fingers that the next financial report will have better news.