We have confirmed through anonymous sources that a "Blue" Centro is indeed being made and should be fairly close to being released. We expect it to be available on GSM at the very least, and possibly made available on AT&T specifically. The reasoning for thinking it'll be on GSM is the Phone app. Look at the pic of the different colored Centros and you can see that they all have the same Phone app as the Centro from AT&T and the Treo 680.

The annonymous sources also said that there would be an extended battery coming soon for the Centro. That sounds great too!

I want that Blue Centro so bad that I can almost taste it! Oh how I hope this annonymous tip is true! Stay tuned....

I have "Centro" on the brain since I'm eagerly awaiting the Black color to come out on AT&T. So I'm surfing the internet even on a Saturday night for any bits of info. And I got a very nice surprise just now as I read some very interesting news over at Palm Infocenter. Seems they've spotted some new colors that could be coming to the Centro!

An official Palm training guide for Palm retail channel partners has revealed no less than four colors of (presumably) unlocked Centros alongside the existing AT&T 'glacial white'. This varied color palette should give GSM customers the world over plenty of opportunities to find a Centro to suit their particular aesthetic style.

Oh heck yeah! Color us a rainbow Palm! I'll take all colors you can paint up for the Centro. I took a look over at the official Palm training guide and here is what pops up.

And as you can see, I chose the AT&T Centro. Upon clicking on the AT&T Centro, another page comes up. Three other pages go by and then a page with the pic below comes up showing five variations of Centro colors. Sweet! When I clicked on the Sprint Centro, I never did see a page come up that had all those color variations. 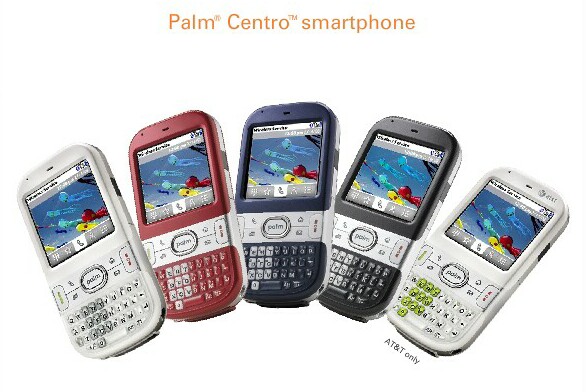 Well, you can clearly see that the White with green keys is marked as "AT&T Only", so like PIC states, presumably, those other four colors are unlocked versions. Man alive, I hope so! If that dark Blue becomes available unlocked on AT&T, I will most definitely wait for that one!

Take a look at that White one with the gray highlighted keys. Hmmm, that sure looks familiar doesn't it? Looks a lot like the one that Dieter spotted at CES recently.

Over in the TreoCentral forums in a Centro thread, forum member babydol says:

I've heard that the at&t black version will be a flat black, rather than having some "sparkle" like sprint's.

That Black Centro in the pic sure looks to be a flat Black to me. If there won't be a Blue version, I don't care if the Black has sparkles or not. I'll take any shade of Black. The White looks great but I just prefer darker colors for devices. Just like I got a Black iPod instead of the White one. Anyway, I hope that we will get some more colors to choose from. It's always so much better and more fun to be able to pick from a variety of colors. The Sprint Centro users are really lucky to be able to choose from Black, Red, and that pretty Pink. I really like the Pink as it's a powdery Pink and not a gaudy, "in your face" shade of Pink.

Let's keep our fingers crossed and our eyes peeled for those new Centro color variations! ;-)