I love a good trivia game! I'm not the greatest at it but I always come away learning something new and interesting. I've played lots of Trivial Pursuit with family and friends and came to enjoy all trivia based games.

So let's take a look at Rampart Software Development's new game Brain Freeze Trivia. I'm reviewing the Palm OS version on my trusty Palm Treo 680, but there is a WM/PPC version of the game as well.

If you enjoy trivia but aren't the greatest at answering trivia questions, you don't have to worry about being embarrassed in front of your Treo or Centro when giving the wrong answers. Just relax and answer away. As much as I love Trivial Pursuit, it takes a long time to play the game. Brain Freeze Trivia moves along at a nice, quick pace and doesn't involve moving any pieces around on a board or deciding who will ask the questions or worrying about the question cards being put back in the box so that the same questions won't be asked anytime soon.

There isn't very much to do in order to get the game setup and start playing. You just choose the number of players from 1-4 and then tap "Next". You can play alone or have one to three other people play. I mostly played the game alone. Nobody here but me and the three cats while the hubby is at work. Barry did play a few rounds with me today though. Anyway, the next screen explains that each player answers ten questions in three game rounds, which are:

Next, you get to pick from six different categories: Entertainment, History, Science, Geography, Sports and Animals. My favorite is Entertainment, just as it always has been in Trivial Pursuit. We all learned a little of everything in school, but I just never did absorb very much Science and Geography into my peabrain. And thank goodness Math isn't one of the categories or I might as well just forget it and not even play. I have a complete mental block when it comes to Math. The second someone asks me anything at all Math related, my eyes automatically glaze over. Perhaps it's because of the 7th grade Math teacher who just happened to always ask me the questions that I didn't get correct on my homework. It never failed. I had several that were correct, but did he ever once ask me any of those? Nope. And my mental block began on the day that he asked me yet another question and I had the wrong answer. He was standing near the chalkboard, and he turned to it and banged his head against the board a couple of times and I kid you not, said, "How dumb!" My, my, what a confidence builder that was. NOT! ((sigh...)) I could go on and on about the other cruel things he did to other students but that's not what this review is about. But in relation to this game, we learn much of what we know in school. In the proper learning environment, students can excel and learn equally in each subject. Students nowadays are learning so much more, so much earlier. They're learning foreign languages in their first years in school. I wouldn't have a chance playing Brain Freeze Trivia against a student today! How many of you have watched the tv show "Are You Smarter Than a 5th Grader?" Man alive, those kids are smart! I don't feel quite as "dumb" (thanks, Mr. X) after watching some of the lawyers and grad students being buried by those kids.

Moving on, the next screen in the game lets you place a wager on how many questions you think you can answer. You can choose from 1 to 10. For example, if you choose "5", the bonus is 10. The bonus is 20 for "6" correct answers. You can be brave and choose the number "10" which brings a bonus of 100. Now you know me; I stuck with the numbers "4" and "5" in most games. ;-) No use in wasting time with wagering any higher than that. After you make your wager, you're ready to begin answering questions. 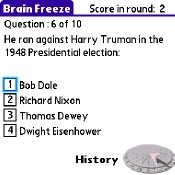 I really enjoy playing Brain Freeze Trivia. You can play the game by tapping on the screen with your stylus or you can use the 5-way navigational buttons. The game moves along fast and the only complicated thing about the whole game is some of the questions. There are some very easy ones and some pretty darned hard ones. Rampart Software Development even threw in some joke answers like this one about Bob Dole. In fact, I've come across a couple of Bob Dole joke answers. Well, maybe it wasn't really meant as a joke when they put his name in the answers for the 1948 Presidental election. Dole was a young man back then, but he was just starting law school that year. Maybe the creators of Brain Freeze just happen to like Bob Dole. Who knows. What is the correct answer? Why, it's Thomas Dewey of course. And believe me, the only reason I know is because I looked it up on Wikipedia. But you already knew that, huh?

Ding, Ding! Round 2! After you've answered all ten questions in Round 1, Palm picks a category for you in Round 2. So you have to answer 10 questions from whichever category Palm chooses. Then you get to wager again to win some points. If the category is one that you feel comfortable with, go ahead and wager higher.

In Round 3, Palm picks questions from a little bit of everything. This is sometimes my favorite round because it's more interesting. Even though most of the questions don't come from my favorite category, at least they're not all Science. And even though Entertainment is my favorite category, there are a crap load of questions in that category for which I don't have a clue! A good example of this was the question about the movie "Pulp Fiction". Believe it or not, I have "never" seen this movie. I know it was and might still be very popular, but it's just one that completely slipped by me for some reason. So I had no idea who played 'The Wolf' in the film. My answer was a pure guess; Samuel L. Jackson. (insert sound of buzzer) Wrong! It was Harvy Keitel. I'll have to remember to watch that movie sometime soon.

Then you get to see your Brain Freeze ranking. Well, I ranked "Average" most of the time. I ranked "Above Average" a few times, and try not to pass out, but I even ranked "Professor" once! Somebody get the smelling salts, quick! Many of our readers just fainted and they've banged their heads against their keyboards. Sorry about that folks! ;-) I don't know what ranking is below "Average". I guess I should have purposefully missed a bunch of answers to see what popped up. Hmmm, now I wish I had wagered much higher during that game in which I ranked as "Professor". I could have gotten a pretty decent score if I had. I was too chicken though and never would wager over the number "5". Alright now, I still hear some snickering out there regarding my "Professor" ranking. 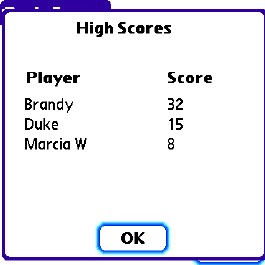 If you score high enough, you get the honor of putting your name in the high score database. Hey, maybe if I keep playing Brain Freeze long enough, I can put my name in there. I have learned quite a bit from playing the game. I loved the questions about animals. I know a lot of dog breeds and cat breeds. I know a lot of the football answers too since I love that game! Baseball, eh, not so good at that one. And I couldn't care less about the NBA. I do pull for my Tarheels though in college basketball. Now, now, Duke fans, stop that sneering. Just kidding! Duke is our rival but I respect them as they are a great team.

One of the nice features of Brain Freeze is that the game auto saves whenever you leave the game. I accidentally clicked out of the game a couple of times and was so mad at myself for the goof-up. Luckily, the game resumed right where I had left off once I clicked on the Brain Freeze Trivia icon on my Treo's Home screen.

Another thing I like about the game is that there are 3,000 plus questions. I've played other trivia games on my Palm devices and I gotta tell ya, some of them were just plain pathetic. After you've answered like 50 questions, you start seeing them repeated all over again. I've been playing Brain Freeze for several days now and I haven't seen any question repeated yet. Plus, you have the option to re-randomize the questions after you've played the game for awhile. To do that, you re-install the smqpack 1.pdb file to your Palm.

Well, my brain didn't freeze too badly while playing Brain Freeze Trivia. Only a couple of times on some Science questions and a time or two on some Baseball questions. Actually, my brain feels more thawed out and maybe a few kilograms larger after playing the game as Brain Freeze is very educational.

Brain Freeze Trivia is a great way to pass the time. And Hey, it might even be a great way to help pass the grade. It doesn't have a lot of fancy graphics but that's no deal breaker. There are some cute little pics representing the categories. There aren't any sound effects, and that can be a good thing, depending on the way you look at it. I've played some games that have extremely annoying background music and sounds. Many times, I end up just muting the sound in preferences or turning the game volume way, way down. I wouldn't have minded having a "Ding" sound for correct answers and a "Buzzer" sound for wrong answers. That would actually be cute as long as you could control the volume.

For just $7.95, Brain Freeze Trivia for Palm OS is really a "no brainer". Give it a whirl and see if you know all that you "think" you know. You might be surprised and learn a thing or two. I sure did. And I had a lot of fun in the process. I can't wait for my sister to come up for a visit so we can play Brain Freeze together. She is a real trivia buff and is fantastic! She wins all the time when playing any kind of trivia game so I look forward to seeing how well she does with this game. She also has a Treo 680 and I wouldn't be a bit surprised if she puts Brain Freeze on her Treo.

Don't forget, you can also get Brain Freeze for your WM Treo.