I looked in the TreoCentral Store and I found a nice candidate, the Jabra BT8040 – which is a bluetooth, hands-free headset.

The unit, pictured below, came in a nicely packed box, which included the BT8040 headset with comfort ear gel (medium-sized), rechargeable battery, user manual on cd, quick start guide, AC power adapter/charger, and a USB cable which allows the unit to be charged via your USB port on your desktop/laptop computer. I appreciate the charging options available. Also included are 5 more ear gels: 2 small, another medium and 2 large ear gels.

The BT8040 is a small headset to be sure, which I particularly like! It’s black with a rubbery feel to it, but not too tacky, and the black is complemented by a silver band which runs around the perimeter from top to bottom and across the front of the headset along the volume control area. I have it pictured below next to a AAA battery so you can gauge just how small it is. I haven’t weighed my BT8040, but the manufacturer, Jabra, says it weighs in at around 10 grams, which is roughly .35 ounces - very lightweight. 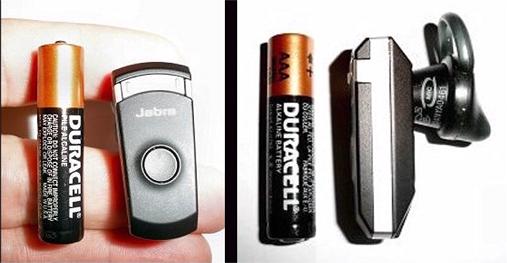 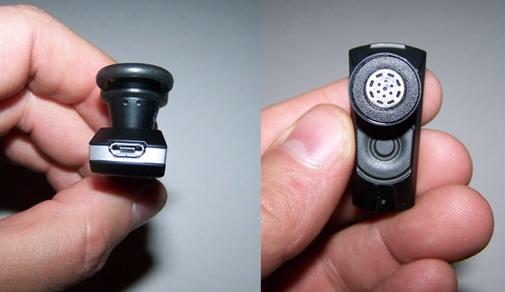 Jabra claims the BT8040 has a standby time of around 200 hours, which is awesome. They also state the unit can be used for 6 hours talk time, again awesome. I’d suggest you occasionally charge your headset if you’re not using it, so it doesn’t sit around for an extended period and the battery life is shortened. Fully discharging and recharging a rechargeable battery tends to lead to a longer battery life in the long run

The headsets LED will typically display one of four different colors, three of which are used to indicate the level of remaining battery charge. If the headset is fully charged, the light will display green when powered on. Similarly, the light will be yellow if the headset is between 70% and fully charged and red if the unit is less than 70% charged. The fourth color, blue, is used when the unit is in pairing mode. Below, I managed to snap a picture of the BT8040 while in pairing mode – notice the blue light. Also pictured is the LED displaying green and red.

When the BT8040 is initially (first use) powered on, the LED turns blue, which indicates the unit is in pairing mode. For my Centro to pair with my BT8040, I first had to enter Prefs. Next, I chose Bluetooth, then chose Setup Devices. After choosing Hands-free Setup, I chose Next. Nearby devices are detected and my BT8040 was in the list. I clicked on it and chose OK, then entered the passkey for the BT8040, which happens to be the usual 0000, four zeroes. It was literally that simple!

Once paired, I immediately called my Centro with my home phone. Sure enough, when I heard my Centro ringing, I put the headset in my ear, tapped the button and was on a phone call with myself. Being a boring person, I hung up on myself, happy that all went well. Hanging up with the headset was, again, as simple as tapping the answer/end button – very nice.

Should you wish to reset the headset and pair with devices other than already paired, you can press both volume buttons and the answer/end button simultaneously. The LED displays the red/blue/green lights simultaneously as a white light which indicates the reset mode. After the unit powers off (about 10 seconds) and comes back on, it goes into pairing mode, indicated by the blue light. Here, you can choose to pair the headset with desired device(s).

A2DP (Advanced Audio Distribution Profile) defines how high quality audio can be streamed from one device to another over a bluetooth connection. For example, music streamed from a mobile phone to a wireless headset.

The BT8040 is a very capable A2DP device! While my Centro doesn’t support A2DP, I paired the BT804 with my Treo 750 and, after a little trial and error, streamed music to my headset. I also discovered a 5th LED light possibility – a purple light, which means the headset is in a special, music pairing mode. The music isn’t, of course, up to par with, say, an mp3 player designed for optimal audio – but, hey, I bought the bluetooth headset for the expressed purpose of freeing up my hands while driving and talking on my Centro.

I listened to music while I wrote this review, in fact. I also listened to it while I did other tasks around the house – and, the headsets charge lasted quite a few hours! I’m not a big enough fan of listening to music with headphones to test the actual life expectancy of a charge for the headset, but do believe it would be sufficient for most folks hehe.

One nice feature of the BT8040 is, when you receive a call while listening to music, the headset kicks into phone mode when you tap the answer/end button, then the headset resumes playing your music when you hang up – nice!

The manual for my BT8040 suggests voice-dialing is possible, but I’ve never been a big fan of this. For the sake of this review, however, I did record the voice-dialing ‘tag’ using my headset and was able to connect after 3 or 4 miscommunications with the voice-dial software I was attempting to use. So, fans of voice-dial can probably appreciate this ability.

Having played with the headset in the house, I set out to test the unit in real-world situations – such as driving my car and talking on the phone at the same time. I know, I too, look down upon people who do this habitually! But, there are times when you just have to take or make a call – and, with a hands-free unit, such as the BT8040, I felt I could safely drive AND talk on my phone at the same time. Not wanting to initially make a call, I pre-arranged with my wife so she would call me at a preset time and I’d answer her call with my new bluetooth headset!

Sure enough, right on time she called and I placed the BT8040 in my ear and tapped the button. Man, she sure sounded clear! This is true, no doubt, because of the acoustic noise reduction which is built into the headset. The headset also incorporates what I’d call smart sound, which not only adjusts the volume automatically, it also protects your ears should someone, say, scream in your ear! We spoke for about 30 minutes as I drove to gas up my Del Sol and to the store for a few food items for supper that night. The sound of the BT8040 rivaled any phone headset I’ve ever used, be it a land line phone, cell phone, etc.

When I arrived back at my house, I asked my wife to give me a couple of minutes and then call me again. I laid my Centro on a table in the house and walked across the street to my neighbor's house. I’m guessing this was at least 65 feet if not more – more than the stated 10 meters or 33 feet in the Jabra BT8040 manual. Again, I answered the phone with my headset and carried a normal conversation with my wife, with my actual phone an approximate 65 feet away. Jabra suggests wearing your mobile phone on the same side of your body on which you put the headset in your ear, but I can’t imagine this would make a difference seeing as I had just successfully carried on the above conversation.

I can’t really think of anything bad to say about this headset, other than the fact that even the small ear gel seems too big for my tiny ear canals. But, that’s because of my ears and most people would surely find a more comfortable fit amongst the 3 sizes of ear gels included in the package.

I’ve used my Jabra BT8040 for about a month now and can tell you I’m very happy and think that the price of $79.95 is a fair one considering all the features. I would highly recommend it to you or anyone! Its multi-function capability, small size, and precise sound make it the perfect device for hands-free cell phone use while driving or simply lounging and listening to music from your A2DP capable devices.