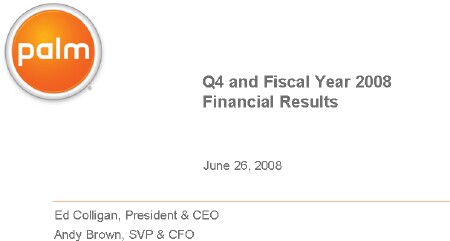 During the post financial results announcement conference call, Ed Colligan talked about each of the three major components in Palm's continuing transformation of the company, People, Products and Platforms. He said that 8 months into Palm's transformation, he was very happy to say that they've made significant progress on each of their major focus areas.

Colligan said that Palm has some work ahead before they return to profitability. He also said that although they've come through a difficult quarter:

I have never felt more enthusiastic about our product pipeline and our ability to get back on the right track.

Okay, here's the part we all want to know; the part about the new products that are coming. So we'll go out of order and start with the Products and Platform stuff first. Colligan said:

We expect to refresh our Windows Mobile product line soon and to continue to expand our product offerings into the Fall timeframe. These new products will deliver major advancement in all areas of smartphone technology, including high performance 3G Radio, integrated Wi-Fi, integrated point-of-interest capabilities based on GPS technology, fantastic design and out of box experience, based on the latest platform technology from Microsoft and enhanced by Palm's famous ease of use.

We strongly believe that our combined Palm and Microsoft solution is the best all around offering for any enterprise customer.

Colligan said that on the Platform front, Palm expects to renew their design and innovation leadership position with their new system software.

We are extremely confident that the enhanced functionality of this new platform and its accessibility to the developer community, combined with the game changing hardware we have designed for it will usher in a new era for Palm. This platform development effort is proceeding very well and we look forward to bringing these products to market.

Looks like Palm is doing well with getting more new and talented people on their development team. That's great!

Mike was a key architect of Microsoft botnet effort and will help us drive our integration between network services and on-device applications for a more compelling and integrated web experience.

Colligan said that besides having these two new leaders on their team, they've also added a whole host of other talented people as Palm builds what they believe to be the "best smartphone roadmap". 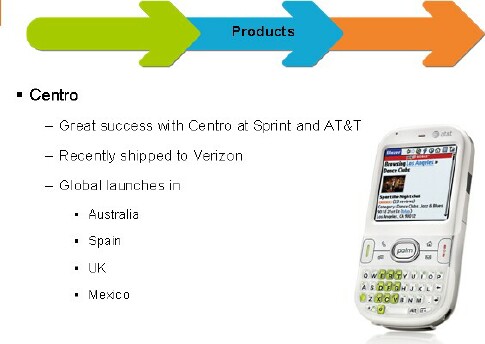 So let's talk about the other major component in Palm's continuing transformation; Products...

We already know that Palm has sold a crap load of Centros, hitting the million mark back in March, only six months after the Centro launch. Not bad Palm! Plus Palm picked up a few points of marketshare, and are up to 13.4% of the US market.

Strong sales of Centros this quarter produced record sell-through of 968,000 smartphones. On the down side, lower sales of Windows Mobile Treos and the continuing decline of Palm's handheld products resulted in reduced Q4 revenue of 296 million dollars. People are still buying Palm handhelds such as the Palm TX and the Tungsten E2, but smartphones are just selling much better these days as people realize the value of owning a phone combined with a handheld. Look at the low price of the Centro for $99. Those Palm handhelds don't have the phone ability and they still cost more. Well, the Palm Zire costs about the same. Anyway, I can understand why handheld sales are declining.

Colligan mentioned that the strong Centro sell-through results were accomplished while ramping up AT&T, and that Centro's launch on Verizon wasn't a factor. But Colligan did say that early sell-through data with Verizon was very encouraging. Palm is continuing to introduce Centro with carriers in global markets such as Australia, Spain, the UK, Mexico, and Rogers in Canada over the last quarter.

Colligan said that he feels that Centro will continue to perform well through the holidays as Palm works with their carrier partners on marketing programs focused on driving the momentum. I just saw a new Verizon Centro commercial the night before last. In the commercial, a guy was in a restaurant or coffee shop with some friends. He ate his food and laid his Centro on the table behind him. Without pausing in his chatting and eating, the guy's arm reaches behind him and his fingers go to town, tapping on the Centro, accomplishing all kinds of stuff, while he's still enjoying being with his friends. There is a guy sitting at the table where the Centro is sitting. He's in awe watching the guy sitting in front of him doing so much on the Centro without any effort, and he tries to grab the Centro for himself. Pretty neat commercial. And I'm sure it'll get people's attention over the holiday.

IDC reported that Palm's market share in the United States nearly doubled quarter-over-quarter, and almost a million new people bought Centros. According to Palm's own studies, more than 70% of Centro buyers are traditional cell phone users or are buying a smartphone for the first time.

Colligan said that with the combination of Centro growth and the delivery of Windows Mobile products, Palm expects to deliver revenue growth in this quarter, but would likely remain unprofitable as they continue to invest in core development and marketing programs for their transformation. But even having said that, Colligan said that he feels that Palm will enter fiscal year 09 a much stronger Palm, in a much better position to compete and to increase market share, and on a solid path to profitability.

We are more confident than ever in our transformational effort. We've added extraordinary new talent, the Centro is a smash success, we have an incredibly competitive product pipeline, and are developing a world class software platform. I expect together, these efforts will deliver positive results in the coming years.

So, Palm is expecting to see an improvement in revenue growth. They still feel that they're on time in regards to their new platform coming out in 2008, and the new products built on the new platform coming out in 2009. I must say that I'm very anxious to see that "game changing hardware" that Colligan talked about. He said that it would usher in a new era for Palm. I hope it's going to be a wonderful new era for Palm and for all of us Palm smartphone fans too!