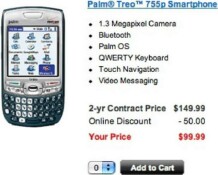 Psst! Hey, Verizon customers! Hear this... If you've been eyeing a Treo 755p but have delayed pulling the trigger on getting one, you might want to jump online and act now. According to a report by Kris at PalmInfocenter, a Verizon spokesperson has confirmed that they are "phasing out" the Treo 755p in favor of the newer Centro. And if you go to the Verizon website, you can snatch yourself a 755p for the same price as a Centro, $99.99.

And as a refresher on what's hot about the 755p from Verizon, back when it launched, Andrew from our sister site, Treonauts wrote about the Treo Voice Dialing software (included in the box) which allows you to place a call, launch an application, even initiate a text or email message with just the sound of your voice. That's something iPhone folks dream about. He also remarked, "...I personally feel that the lighter and slimmer form-factor with no protruding antenna will make a significant difference for those Treonauts looking for a slicker alternative - it's certainly much better looking than the Treo 700p."

Treo 755p vs. Centro? Verizon customers better act quickly before the decision is made for them. One more thing to note: The Verizon spokesperson said they will continue to provide customer support for the Treo 755p. You can probably count on Palm to support you as a Plan B.