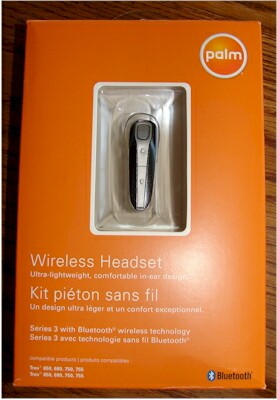 Bluetooth headsets have always caused mixed emotions with me. I love the freedom that they allow (I detest wires) but for the most part it seems that you have to use them with that token grain of salt. People tell you "I can hear you ok, but I can tell that you are on a headset." And let's not even start with the volume issues that can plague them. Palm's Series 3 Bluetooth Headset offers an affordable but formidable choice in the headset arena and is definitely worth a try for any Treo or Centro user that uses the Athena power cord. 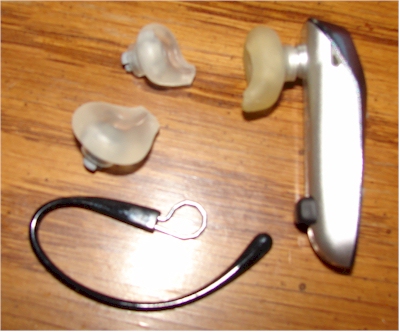 Palm includes 3 ear gels (which is nice because not everyone has the same sized ear canal), an ear hook and a convenient pen-type holder for storage. Palm neglected to include a charger, which is one of the only areas that rubbed me the wrong way with this package. While the target user is obviously a Treo or Centro user, it does not allow you to charge both items at the same time. Don't get me wrong - if you travel you very well may appreciate this. The ability to take only one charger may be welcomed, though it may require a bit of planning as to which item you will need to charge. At home this is less of a concern and the extra charger would have been welcomed.

For those of you who have issues pairing or keeping your headset paired (as a long time Treo/Centro user this has been an issue in the past), this headset pairs and stays paired very well. Of course, part of this may be because the Centro tends to work well with Bluetooth devices, though cheaper headsets have still provided difficulty. This is not the case with this headset. Hold the button down when turning it on and as long as your Palm is discoverable, it pairs almost immediately.

Of all of the features and different looks that companies give headsets, the bottom line remains the same with them all, at least in this reviewer's eyes. Battery life, range and sound quality are king. This is where this headset shines.

The sound quality and volume is above average. Not many times did I have problems hearing the other party and there were several times people commented that they could barely hear that I was on a headset. During normal usage there was little to no static. The times that I noticed static was when I was carrying the phone in my pocket, which tends to almost always create some sort of interference (maybe it's my magnetic personality?) There are two prominent buttons on the headset to control the volume, which makes it very easy to adjust in a call. The On and Off functions are controlled by a single button, which works well enough, however, a slide on/off works better on bluetooth headsets – it's just easier to operate. Of course, your mileage may vary depending on your own preferences.

The range of the headset was average. So many things seem to come into play when testing out the full range – walls, other signals – even underground parking. I was able to get a good 18 feet away from the phone with a clear signal. Anything more than that starts bringing on the gods of headset static. Though for the most part the average user will be approximately 5 feet away from the headset and this becomes a moot point.

Battery life is one of those more difficult things to test either standby time or talk time alone. Since most of this headset's life is spent in mixed use, it is more fair to rate its real world usage. I was able to get an average of 3 days between charges with moderate usage. Taking into account that was probably a good hour of calling a day, coupled with the standby time, it seems that this headset's specifications are spot-on. Rated at 3.5 hours of talk time, the fact that I was able to achieve that with the 3 day standby was a valiant battery life.

If you are in the market for a Bluetooth headset and still use a Treo or Centro with the older Athena connector, this headset is a great choice. Though not without its faults, most of those are determined by your own opinion. Some may welcome the fact that you only have to carry one charger, while others will wish that they could charge both their phone and the headset at the same time. However, even with that being said, this is still my favorite headset to use on a regular basis.