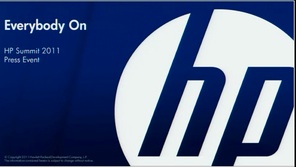 The general consensus from the write-ups following Leo Apotheker's 40-minute presentation yesterday was that it was light on specifics.

> Building cloud services (the HP cloud) for people and businesses. The platform will include an applications marketplace where consumers and businesses can buy software and services from HP and third-party developers.

> Expanding the webOS platform -- delivering up to 100 million webOS-enabled devices a year into the marketplace, from phones and tablets to desktop PCs and printers.

Note: HP's first tablet, the TouchPad, is scheduled to ship in June.

> Selling data-crunching appliances to companies that need to analyze large amounts of data in real time, such as health care, insurance and rental-car businesses.

In the San Francisco Chronicle article covering the event, Gartner analyst, Mark Fabbi was quoted saying, "There wasn't a lot of detail about anything. It was almost an event that said, 'We're announcing that we're going to be announcing something sometime in the future.' There wasn't a lot of real meat behind it. ... How do they actually do it? That's where you start scratching your head a bit."

Over at SeekingAlpha.com, Brenon Daly wrote the following:

Ever since Leo Apotheker replaced Hurd, people have been speculating that software would become a renewed focus at HP (HPQ), if for no other reason than Apotheker spent some two decades at software giant SAP. Indeed, as he laid out his grand plan on Monday for HP in his first major strategy speech as CEO, Apotheker hit on software a number of times. (At least we think he did. It was hard to tell what was actually being announced in HP's buzzword-laden release, which was heavy on 'convergence' but light on specifics.)

Perhaps the most attention getting news out of the event was HP's dividend announcement.

>> Additionally, the company's board of directors has authorized a 50 percent increase in the amount of its regular quarterly dividend to $0.12 per share.