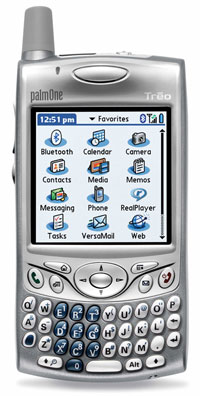 Four months ago TreoCentral published the first extensive and highly accurate article detailing the next generation Treo, codenamed Treo Ace. We elected to remove the article due to external pressures (it is since been reposted), but not before it was viewed over 100,000 times. The rumor spread quickly and has since all but been confirmed by multiple photo sets, documents, presentations, first hand accounts, and leaks from within palmOne and Sprint. Today, it will become official. palmOne will finally announce the next generation Treo, now known as the Treo 650.

The Treo 650 is an evolutionary upgrade to the Treo 600. palmOne made slight external changes to the form of the device, as they hope to continue to capitalize on the success of the Treo 600 platform. However, inside the Treo has been rebuilt from the ground up. As with the Treo 600, there will be two versions; a quad-band GSM version, and a dual-band CDMA version. The two phones are identical in all respects except for the radios contained within. The most notable new features are an improved 312 Mhz Intel PXA270 processor, a new 320x320 High resolution TFT screen, built in Bluetooth, non-volatile flash memory, a removable battery, and a new connector.

The most visible change to the Treo 650 is the new screen. Unlike the Treo 600ĺs dated 160x160 CSTN screen with 12bit color, the Treo 650 has a modern 320x320 TFT 16 bit color screen. The physical size of the screen remains the same, but now there are four times as many pixels in the same space. Blazer will be able to display much more of a web pages; photos will be more detailed and vibrant. The higher resolution screen brings the Treo 650 in line with almost all modern PDAs. 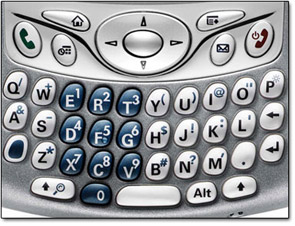 The keyboard has undergone yet another revision in the Treo 650. According to palmOneĺs Greg Shirai, the QWERTY keyboard is the main feature that separates the Treo from the rest of the industry. On the 650, palmOne curved the keys up into a smile shape allowing them to have slightly larger keys. They also reduced the force required to press the key, and flattened out each key slightly. The keyboard backlight has undergone a significant upgrade, so it is much more visible in dark.

The keyboard also lost two keys; home and menu. These have been moved to dedicated keys on the right and left of the five-way navigator. All the navigation keys are now centered in one area of the device. Replacing the home and menu keyĺs location on the keyboard is an ALT key and another shift key. The alt key previously used to be shared with the 0 key; long time Treo users will remember the alt key as the list type key from the 180/270/300. 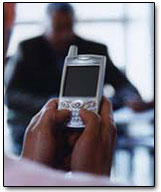 The Treo 650 is first and foremost a phone - palmOne wanted to make that message clear by finally adding green send and red end keys. These replace the phone and screen hard keys. The redundant power button at top has been removed. On the left palmOne has added a customizable button under the volume keys.

The old Treo connector, which has been with the Treo line since the initial 180 release, has been replaced by a new palmOne 13-pin multi connector. The new connector offers speaker and microphone streams (perfect for car kits), and has separate hookup points for power, so that a power only connector can be much smaller (2 pins wide). The newly released Tungsten T5 also uses the same connector. The 650 still has a stereo 2.5 mm headset jack on the bottom. 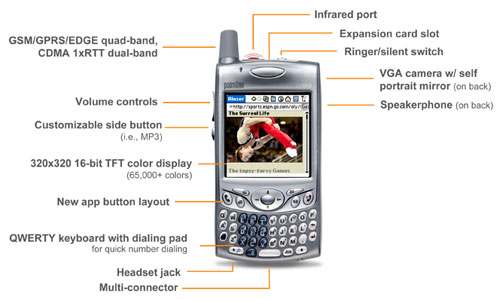 Inside, the Treo 650 has been rebuilt from the ground up. The processor is now a 312 Mhz Intel PXA270. This compares favorably to the 144 Mhz ARM processor in the Treo 600. The PXA270 is also used in palmOne's Zire 72, and Tungsten T5. The faster processor is said to make Blazer much faster; we will find out more when we have hands on time with the unit.

Built in Bluetooth has arrived in the Treo 650. While the exact list of supported profiles is unknown, PalmOne is advertising that you will be able to use headsets and bluetooth car kits, and sync your Treo 650 with your desktop and laptop. In our brief talk with Greg Shirai earlier this weekend, he noted that the Treo 650 will will also support the ability to become a bluetooth modem for wireless internet access on laptops or other PDAs. However, carriers have the ability to cripple such advanced Bluetooth features if they want to. We will have more details in the next few days regarding Bluetooth.

palmOne is changing the structure of Palm OS by replacing the volatile RAM inside, with a new nonvolatile flash chip. The first device with this feature was the Tungsten T5, but the Treo 650 also has it. This means that you can replace the battery, or wear down the battery, without fear of losing any of the 23 MB of data that the Treo 650 can store.. While the benefits are great, Mr. Shirai did mention that there have been reports of some applications, such as email clients, having difficulty with then new file system.