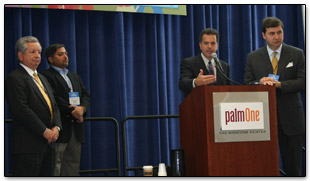 The release of the Treo 650 prompted many questions about the specific details of the device. Yesterday, after the Ed Colligan keynote, TreoCentral attended a press conference for palmOne, where Intel, Sprint, and palmOne executives spoke and answered questions. Later that day, we had a private hour session with Greg Shirai, Director of Product Marketing for the Wireless Business Unit of palmOne, and later 15 minutes with Michelle White, Product Manager for the Treo 650.

We have created questions, and answered them to the best of our ability based on the information given to us by palmOne. 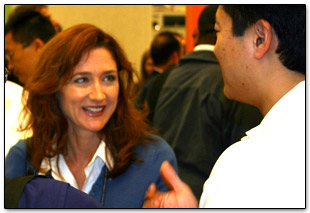 Q: What's up with Bluetooth?

A Bluetooth Profile can best be described as a driver for a specific task, interoperable with all other Bluetooth devices that support that profile.


DUN is what was causing the ruckus on the Treo 650. Sprint has clarified their plans to support DUN on the Treo 650 via a firmware upgrade in the future. What follows below is for archival purposes only.

Our take: Some carriers, such as Sprint, while supporting Bluetooth, have opted to disable DUN, because their plans are not priced for Treo users to act as modems for laptops. Sprint would supposedly rather you pay $80 a month, and use a PCMCIA card, than to use the $15 a month vision service on the Treo for the same purpose. Currently, the GSM Treo's on the show floor all support DUN, as they are not locked to any carrier, while the CDMA units are all Sprint branded, and have the DUN profile disabled, as we predicted in our hands on article.

In my opinion, this crippled Bluetooth, as it takes away a a major functionality of Bluetooth. I have been looking forward to using the Treo as a Bluetooth modem. Also, in testing (and maybe related) we were unable to get OS X to use the Treo 650 as a phone. Normally when you connect a Bluetooth phone to OS X, you can dial out from your address book. When an incoming call comes in, it would show up on your screen. And you can use the phone as a modem when out of town. None of these features were available to me when I paired the Sprint Treo 650 with my PowerBook G4.
In our brief testing, headsets worked great with the Treo 650. We also were able to successfully send a contact from a Treo 650 to a Sony Ericsson t608 over Bluetooth. palmOne says that early indications show that their TomTom GPS unit will also work with the 650 over Bluetooth.

Q: Where does the Treo 650 stand on Voice-control software?

A: palmOne understands that for some users voice dialing and voice control is a must have feature for phones. Because of this, according to Greg Shirai, they are bundling on the included CD a free thirty day trial of VoiceSignal's Voice Dialer software. Voice Signal creates voice dialing software for many popular cellphones. Supposedly they have a Palm OS client that can dial numbers as you say them number by number, or dial names simply by saying the name of the individual you wish to call. After the trial expires, dialing number number by number will still work. We could not find information about the Palm OS client of Voice Dialer; VoiceSignal does not list Palm OS as a supported platform - however, palmOne does show up on their supported manufactures list. We will have more details in coming weeks about VoiceSignal.

From what we have been told, one drawback to VoiceSignal's product is that you can not yet initiate voice control using Bluetooth headsets. Instead, a built in Bluetooth "Voice Tag" solution is offered in the preferences screen.

We are unclear how Voice Tags works (i.e. if it requires specifc BT hardware), and unable to get it to work with either a Jabra and Bluetake Headsets. palmOne's Allen Bush stated that the technology may not yet have been implemented in the pre-production units availble for resting. We are awaiting a response regarding this functionality. 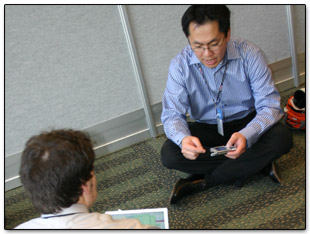 A: Greg Shirai acknowledged that for a time, palmOne was planning to include a 1.3 MP camera in the Treo 650. However as palmOne got further into the process, they discovered that the 1.3 MP camera exhibitied similar low-light qualities as the current Treo 600 camera. palmOne wanted a camera that would work in any situation, since the disappointing quality was one of the more vocal complaints about the Treo 600, and felt that good low lighting support was more important than higher resolution. So it was not a cost issue, but a technical one. The VGA camera, in essence, is a generation ahead of the 1.3 MP cameras. Maybe next Treo we will see a camera capable of taking low light photos at higher resolution. One thing we learned about the camera application is that the Treo 600 application was designed by IDEO, while the Treo 650 application was designed by Arcsoft.

Q: Why change the keyboard?

A: palmOne believes that they have come up with a novel keyboard design that in patent terms, stands on its own. RIM holds many patents on thumboard keyboards, and palmOne was forced to license such patents for use of the thumboard on earlier Treos. While palmOne was unable to discuss any specifics of their relationship with RIM, Greg Shirari did mention how they would rather not pay license fees.

The keyboard itself went all white because the backlight shines much better through the white keys. The flatter keys make it easier to read the printed text, while the curved smile shape allows the keys to be bigger and have more room between them. It is still hard for me to opine that it is better or worse, as I have not had enough time to really type on the device. The palmOne people and everyone else who I've met and have had the device for some time all appear to love it.

A: palmOne may seem crazy for not having a WiFi solution available, but at least they now seem more open to the idea then previously. During the press conference, the first question to Ed Colligan was why they did not built WiFi in. He replied: "We put things in that we think that are absolutley critical to the device".

When pushed for information about adding WiFi later, he added "We do have a wifi card that will work in the SD slot, but we do not have the drivers yet." Colligan continued to say that palmOne will be working on creating the necessary drivers.

This is opposite of what Greg Shirai told us in the pre-briefing conference call earlier this weekend. Shirai said that palmOne will not support a WiFi card for the Treo 650, as it was more complicated than drivers alone. Along with staff from mytreo.net and InfoSync World, we asked Colligan about this discrepancy. He replied that it was a matter of resources, and yes palmOne will be indeed working on WiFi for the Treo 650. Colligan seemed serious about this, even in spite of the challenges that were demonstrated by Shirai. It will only be a matter of time before something happens. At Mobile Focus, I ran into a representative from C-Guys. C-Guys spent six months trying to get their 802.11b card working for the Treo 600. They gave up, due to power constraints and the sheer complexity of trying to get a working driver made for the Treo 600. However, they are now working on an 802.11g card and have attempted to change the process in which drivers will work. C-Guys claims that within a year we should be seeing some sort for Wifi card working with at least he 650.

A: The short answer to this is yes, but with a few exceptions. Palm OS applications written for Palm OS in general are pretty much guaranteed to work, unless they run large multi megabyte databases. Because of the new flash ram file system, palmOne has encountered a few problems with email and other programs. It is not a major problem; small revisions from the application maker should fix things. For the major applications, palmOne has worked with the developers to ensure compatibility by the product launch.

A: It is universally acknowledged that the Treo 600 had some problems that caused it to fail and need replacement. A lot. palmOne hopes to have fixed these problems in the Treo 650. They have switched from using Seletron to manufacture the Treo 600, to using HTC to manufacture the Treo 650. HTC builds products for most major computer companies, including HP's portable line. The Treo 650 went through palmOne's longest beta test ever, in which they hope caught most of the bugs. 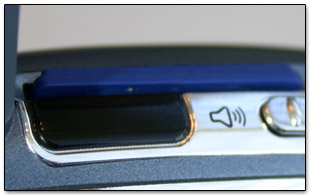 Regarding my previous comments regarding a lose cover for the battery, Greg Shirai showed me a newer design that had lower tolerance for the clip, and also added a piece of felt to create greater friction to keep the back in place. On a side note, we did notice that the SD card isn't 100% flush to the unit, again. However, Peter Skillman, Director of New Product Development, explained to me that while the SD card is not flush to the top, it is close enough that it will stop the in pocket SD card pop out problem. They were aware of this problem, and specifically designed the Treo 650 to mitigate this risk. I find it slightly hard to believe, but as I have not kept a Treo 650 for any period of time, I will have to take him at his word.

A: We were able to find out exactly which chips are powering the Treo 650. palmOne had previously announced the Intel PXA270 as the processor, but we also learned yesterday that the bluetooth chip is a Broadcom BCM2035. In the Treo 600, palmOne purchased a radio module for the CDMA version from Airprime, and created their own radio based on a Broadcom GSM chipset. In the Treo 650, palmOne created both CDMA and GSM radios from scratch. The GSM Treo 650 is powered by a Broadcom BCM2132. The CDMA Baseband processor is made by Qualcomm, though the exact chipset is unknown. The screen is made by Sony (Corrected, we previously reported sharp), and the camera is supplied by Micron. While we do not know who made the memory, we do know that there is a 32 MB SDRAM and 32 MB of Flash memory. The two chips are required because programs must run in SDRAM. The flash memory is always kept insync with the SDRAM.

A: Sprint, as previously announced, will carry the Treo 650 in all of it's channels in mid November for a base price of $599. The Treo 650 will be Sprint Exclusive until December at least, most likely heading into 2005. New users will be offered a $150 rebate. Customers who have been with Sprint for more than 18 months will also be offered this $150 credit toward a Treo 650 (This is the "upgrade" credit). An additional $30 discount will be provided for customers who purchase the phone online. palmOne did not announce any other carriers, but the GSM units at the show are all colored AT Wireless Blue (hmm... makes you think). While not announced, in early 2005 TreoCentral expects AT&T Wireless and Orange to begin offering the Treo 650.