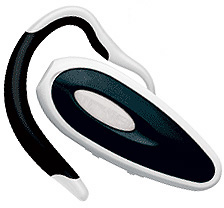 Bluetooth headsets have been evolving from Borg-looking long booms to smaller, less-obtrusive designs. A growing number have removable color faceplates. The sporty Jabra BT130 comes with quite a few faceplates and is a fun headset that seems geared toward younger Bluetooth users.


To pair the Jabra BT130, hold the volume up and the talk buttons for about 10 seconds until you see a solid blue light. Passcode is 0000. The BT130 paired quickly and painlessly with the Treo 650.


The Jabra BT130 is very small and lightweight. You barely notice that its on. The earloop is removable, allowing one to switch ears. The BT130 feels very secure when wearing and does not feel like it would fall off easily. The earloop narrows as it gets closer to the boom, and the thin part sometimes hurts my ear after extended use. I wish it was consistently the same size like the Sony Ericsson HBH-600.

When wearing the BT130 on the right ear, the bottom of the boom has volume buttons on it. The buttons are in the middle, which I found inconvenient. I would have preferred the buttons to be closer to the front of the boom so I wouldn't keep touching my ear when changing the volume. An audible tone sounds when adjusting the volume, and it also lets you know when you have reached the max/min levels.

The back of the BT130 is where the power cable plugs in. The A/C adapter is small and can plug into a power strip without blocking other plugs.

The BT130 comes with four color plates (yellow, purple, black, and blue) that can easily be installed. Near the back of the boom is a spot where you can get your thumbnail in. Lift and slide your nail until two tabs are out, then slide the plate out. Since the boom has black rubber, I like the black plate, as it matches the BT130 better. I'm surprised a white plate wasn't included— this headset complements the iPod very well, even though the iPod doesn't use Bluetooth. 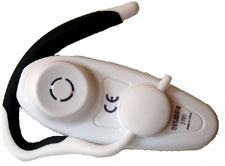 The BT130 autoconnects to the Treo 650 when making and receiving calls. People that I spoke to for the most part were able to hear me Ok, though I had to keep the Jabra nearby. I am one of those people that move all over the place when on a cordless phone, and when I had my Treo on the table and walked ten feet away to the kitchen, the other caller would complain that I was cutting out. I could always hear the other side fine though. If I kept the Treo nearby, I didn't have too many problems.

While working on this review, my parents stopped by for a visit. They had never used a Bluetooth headset before and for the five minutes they used it really loved this headset. Although they don't need a Treo, maybe I can get them a Bluetooth phone so they will stop using their current junky phones.

The thing I really didn't like about the BT130 is how long one has to hold down the action button to turn the thing on and off. It's almost 10 seconds. When I'm trying to turn the thing off, I'm usually in a hurry, so those ten seconds seem like thirty.