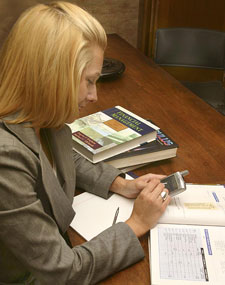 This is part 2 on the Treos' extra calculators. It documents the first three of them. We'll spend some time with Math first, and then visit Trig and Finance. To review, get Calc running and press the Right button on the 5-way, or check out Part 1 in this series . Having all the extra calculators around isn't useful if you don't know how to use them or what they're for, so I'll take it slow and document their features, explain what their buttons do. The final episode in this series will finish off with the Logic, Statistics, and Conversion calculators.

A kind reader, the Engineering Program Manager for Palm, no less, wrote in with some additional information about the calculators. He wrote,

"As far as I am aware this calculator came from the old Parens calculator which first appeared in the ROM of Visor handhelds. There is a user guide of sorts available for this now withdrawn piece of shareware. Palmblvd still lists it in the catalog although the author no longer supports his version. Your readers might find this link to the old shareware download (and hence more original detail from the user guide of that version) here."

The documentation from there is minimalist, to say the least, but there you have it. The Parens calculator offers considerably more than you find in today's Treo 650 and 700p – a currency converter, for example, as well as user-configurability of some functions. 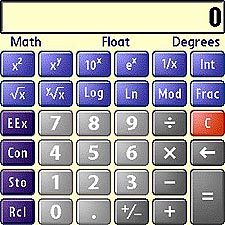 Back to today's Calc, here's what the Math calc offers:Practical example: If you're building a stringed instrument, you can figure the critical placement of its frets with your Treo. To determine the spaces from one fret to another, the calculation uses 12 th roots of 2, to a minimum precision of 7 decimal places. On the Math calculator, press 2 (what we want the root applied to), then the button for user-specified root (second from left, second row), then 12. When you tap the big "equals" button, the answer appears: 1.0594630943593, which rounds to 1.0594631. Seven decimal places. Applied to the instrument with some other calculations, you'll get modern tuning. Shades of Johann Sebastian Bach's well-tempered clavier.

For further guidance on figuring the actual distances from fret to fret, see here, link courtesy of Volbrecht Custom Guitars. Before you put chisel to fretboard, however, look around the internet and in (gasp!) books for more on the 12 th root calculation, the diatonic scale, and tempered (or not) tunings. To sound right, exact mathematics have to be "stretched" slightly in some cases.

Moreover, there are multiple ways to extract the root, and many ways of calculating fret distances and nut placements, some more attuned to tonal tuning than others.
Memoreeee


The advanced Math calculator offers a much nicer "memory bank" feature than the basic one, plus an array of built-in constants at your fingertips. Tap the "CON" button on the left side, and you'll see the first of two screens full of constants, including Pi, Avogadro's number, Planck's Constant, and the speed of light, to plug into those important time machine coordinates. Tap Con to inspect.

Like the other calculators that go beyond "basic", this one offers nine banks of memory to store numbers – the results of other calculations, perhaps, or your own constants – like the 17.817 figure you'll need in measuring off those frets. 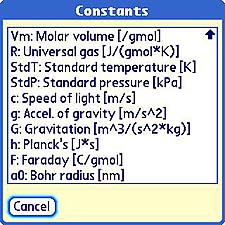 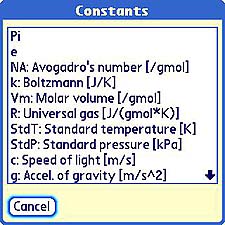 
Trigonometry wasn't my strong point in school. Geometry, either, but I did manage to survive that. I couldn't figure why I should waste time proving something that was already known true – must be so, because the proofs were tucked away in the teacher's version of the textbook. Trigonometrically deprived, not to say "challenged," I've managed to make it this far, somehow, and here I am looking at a trig calculator that would have made the class work even more useless. If only I could have squirreled a Treo 650 in my bookbag. 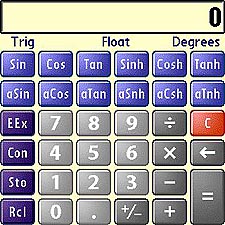 The Trig calculator works in a fairly obvious way. Tap some numbers – use the keyboard if you'd rather – and choose the trigonometric function you need. For example, to find the cosine of 45, tap 4 and 5, then tap the Cos button. The second row of buttons offers arcsine, arccosine, etc, and the memory banks function. The functions that end in "h" are hyperbolic: hyperbolic Cosine (Cosh), hyperbolic Tangent (Tanh), etc. These are useful mostly in engineering. So, if you're a rocket scientist, or wannabe….

Impractical Example: While building that geodesic dome to surround your time machine's engine, calculate the simple, as well as the complex with your Treo's Trig functions. Okay, maybe not. However, you could use these functions to compute the length of roof truss sections, or the braces for that elaborate deck you'd like to build yourself. Good ol' Pythagoras probably had trusses in mind when he whipped out his famous theorem. Square each side, add them together, and that's the square of the hypotenuse – in the case of pitched roofs, the rafters' longest side.

Many things behave according to sine or cosine functions, including daytime/nighttime temperatures, the seasonal variation of consumer demand for certain merchandise, and the cyclical nature of recession and prosperity. Trigonometric functions are essential in modeling real life situations, as well as the calculations for 3D animation.