Since Vodaphone announced the Treo 750v, requests for what all these wireless acronyms mean have been on the rise. GSM, GPRS. UMTS, HSDPA -- it seems like every story is littered with acronyms. Sure, the Treo 750v has UMTS, but how fast is that? If you're considering an upgrade of any phone, or just want some idea of what these TLAs and ETLAs mean, this article is for you. I'm going to try to keep your eyes from glazing over, but I can't take responsibility for what happens if you follow the Wikipedia links.

Let's start with the basics, there are two types of digital cell phone networks: GSM and CDMA. GSM is the worldwide standard used by most countries. CDMA is used mostly in the US and South Korea.

Once we start talking about ways of transmitting data over these networks things get more complicated. To start, though, these methods are usually categorized generally by what "generation" they are: 2G, 3G, and 4G are shorthand for 2nd generation, 3rd generation, and 4th generation, respectively. A higher number basically translates to faster internet.

Another acronym you'll see throughout the article is kbps, which means kilobits per second. If you have broadband at home and know your internet speed in mbps (the m is for megabits), you can multiply your mbps by 1024 to convert to kbps.

I don't intend to play favorites between GSM and CDMA -- both have their advantages and disadvantages, and both tend to leapfrog each other routinely. The competition between the two is probably good for the US market.

GSM is used more or less everywhere there is cell phone coverage and covers about 80% of the world market. Here's a huge coverage map if you'd like to see where you can get cell phone service; actual local conditions may vary.

Cell phone companies that use GSM primarily include T-Mobile, Cingular, Vodaphone, O2, Orange, DoCoMo, and countless others that English speakers may or may not pronounce correctly.

GSM phones use something called a SIM card, which is a tiny card that has your phone number and service provider that typically lives in a tiny tray you put in a GSM phone. In the case of GSM Treos, this little tray holding the SIM card slides into a slot in the back of the phone's case. Any phone that has that card in it is, for all intents and purposes, your phone. You can store your contacts on the SIM card, which is handy if you upgrade your phone or switch phones often, or if your phone is out of battery.

You can use any GSM phone on any GSM network, as long as it's "unlocked." If your phone is "locked," your phone will only accept SIM cards by the carrier that originally sold the phone. Locked GSM phones can generally be unlocked for a fee. If you ask very, very politely and have a very good excuse, it's possible that your carrier will unlock it for you. It doesn't hurt to try, but they generally don't like doing it, as they sell you the phone at a highly reduced price -- if you leave, they lose that investment in you as a customer. You can use unlocked phones that are not sold by your carrier... if you're technically inclined, adventuresome, or you laugh at danger.

Lastly, if you look to the Old Continent or Asia to import your phones, make sure that they're quad band GSM phones. Different networks and different parts of the world may use different frequency bands -- for example, the two Japanese and European bands are very different than the U.S. bands, as figure 1 illustrates below.

But beware of buying gray market electronics. You might save some money or get some cool, different-looking model of something, but you can forget about a factory warranty or support. This applies not only to phones but to all consumer electronics.

Are you ready for the glut of acronyms? From slowest internet to fastest internet on GSM networks, they are: GPRS < EDGE < UMTS < HSDPA. Each is a little less than an order of magnitude faster than the one that precedes it.

GPRS is pokey (2.5G). If you just need your phone to mosey along the internet or you're incredibly patient, GPRS will do fine, its real world speed is similar to dialup -- about 56Kbps.

EDGE (2.75G) is a lot faster than GPRS. You might compare EDGE to a budget or rate-limited DSL plan (speed of about 180Kbps).

UMTS (3G) is broadband internet on your phone. UMTS is fast enough to download music, or do video calls, or watch streaming video. The top speed of UMTS allows is 1920kbps, though users are generally limited to less than that -- around 384kbps but steadily improving.

HSDPA (3.5G) is again much faster than UMTS, and it's been rolled out already in a few small areas of the world. The standard supports about 14700kbps, though what users get will vary by carrier. Very few smartphones support HSDPA yet.

CDMA is much simpler to wrap your mind around than GSM. CDMA phones tend to use more battery life than GSM, but CDMA has strengths that derive from that which will be described later in this article. All phones are locked, and it's nigh impossible to transfer a CDMA phone from one carrier to another.

Getting a new CDMA phone will generally involve getting a new contract. Since CDMA is a significantly smaller market, some phone makers have abandoned it for financial reasons. Many others, notably, have not.

Since CDMA is used in much less of the world, roaming internationally is generally not easy for CDMA customers. Globetrotters, fear not, your pain will be lessened in the next 5 years or so. CDMA is used primarily in North America, Korea, and Japan. Notable CDMA carriers include Sprint together with Nextel, Verizon, and Alltel. Though Alltel maintains a vast rural GSM network to provide roaming service to GSM customers, Alltel customers currently utilize CDMA phones and technology.

The Internet on CDMA

1xRTT (2.5G) is the slowest internet you can get on CDMA. Though speeds are faster than GPRS, they're not as fast as EDGE -- the service is generally capped at about 144kbps in the U.S., and real world performance is still like dialup -- about 56kbps.

EV-DO (3G) or "Evolution Data Optimized" is the fastest internet you can get on CDMA. The theoretical maximum a phone can get is about 2500kbps; what users can get varies by carrier. My friends generally report about 200-450kbps with peaks up to 600kbps. Zoom!

CDMA has a specific advantage versus GSM in the U.S. in that the CDMA 3G network is already in place. Sprint and Verizon both have EV-DO available in over 210 U.S. markets each, whereas Cingular has UMTS only in these cities, and T-Mobile is still working on a 2007 UMTS rollout. On the other hand, EDGE is available in thousands more cities in the U.S. than EV-DO, though it is significantly slower than EV-DO.

The Internet on Treos

A chart is included below to give an idea of what the various data services will get in the real world, and what the spec sheets say they'll get. Your mileage may vary. 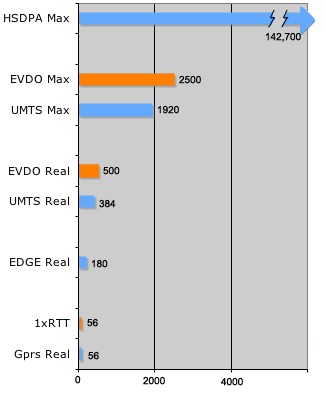 Would you like to know what kind of speed your phone gets? Give it a test at DSL Reports' mobile site and discuss it in the forums.

Hopefully, you made it all the way to the end, your head didn't explode, and some of the gobbledygook fog lifted. If there are any questions you have remaining, post them to the forum and I'd be happy to answer as best I can.