Author's note: to see the photographs and montages full-sized, just click on them. 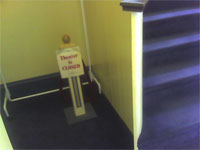 People use cell phone cameras pretty much the same as film-type consumer cameras. I see them frequently, wearing funny hats for birthdays in restaurants, and outdoors in front of this capital city’s stodgy monuments. Ernest and his important new girlfriend, Cousin Sam acting up at the barbecue. Sometimes I see people clicking decisive moments with Treos, too, squinting at the screen in the sunlight or poking at the shutter icon with the stylus while their latte gets cold.

In a previous article, I showed off the Treo 650’s ability to capture perfectly mediocre shots in a rather dark coffeehouse. So, as I gloatingly unpacked my new Treo 700p, I looked forward to an improved camera experience and much better pictures. The 700p’s 1.3-megapixel camera boasts higher resolution, and I hoped it would also solve some of the 650 camera’s other problems.

I hoped in vain. The camera just has more pixels. It’s still a fixed focus, fixed-aperture, “better-than-nothing” marvel. In fact, in low light situations the 650 will at least record something, and the 700p turns a blind eye. Literally. 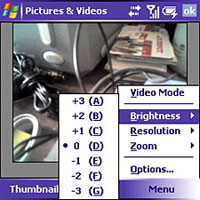 The 700w is a little friendlier to low light, since it offers a menu of options that include a very useful brightness control. So, although the 700w has almost the same low light response as the 700p, it’s possible to get better pictures out of it, at the expense of contrast -- the price of getting a picture, instead of cussing a stygian screen.

I’m making a big deal out of this because low light is an important element of the kind of snap shooting that’s the most fun to do with a cell phone camera. Click your friends sneaking a smooch on the deck at a party or hanging out in the den shooting pool. Record your date’s smile for prosperity, whatever. Situations where light is often scarce.

The Treo 700p makes decent daytime shots, but falls way short with the lights down low, much worse than the 0.3-megapixel Treo 650 camera. It doesn’t take total darkness to bring out the 700p’s worst, either. I explored--with a light meter—the 700p’s low-light response in a review of the Phone Phlash cell camera light. 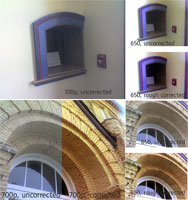 Generally speaking, indoor picture taking means lower light than outside daylight. In a well lit room, however, the 700p delivers decent pictures, much better than the 650. These real-world examples tell the story.

I snapped these after a delectable concert at the Newberry Opera House, a gloriously restored 1881 edifice with incredible acoustics. After the concert, I stood around looking kinda nutty (but they’re used to that), holding up one Treo then the other and clicking away. The pictures come mere seconds apart from the same spot.

The lobby of the opera house is lit by huge windows on two sides, plus chandeliers worthy of Scarlet O’Hara’s legendary digs. Plenty of light for both Treos, as you can see. Any of these shots could be fixed up in image processing and serve some useful purpose, like occupy space in a photo album. The orchids are always in bloom at the opera house. They’re from a local commercial grower. The wall behind them in yellow, and the baseboards really are dark blue.

Since the concert I’ve added a 700w to my Treo menagerie. Here are shots from all three cameras, at the bottom of the hill from which. General William Sherman shelled the city in 1865.

Well, this is afternoon sunlight on a perfectly gorgeous day -- best-case scenario. Let’s go back to cases of the less than ideal persuasion.

I tested low-light performance with my Treo 700w’s 1.3-megapixel camera. Oddly, it’s much better than the 700p. The 700w offers a menu of options where you can bump the picture’s overall brightness. This setting affects both the screen and the snapped image.

Compare these images of the three Treos’ screens as their cameras deal with a very dark scene. I set them in turn on my Seidio InnoDock cradle. The cameras naturally pointed at the space behind the cradle, which on my desk is devoted to that all-important component mess of cables. The space is lit only by a diffused, indirect 100-watt incandescent bulb across the room. I keep the room light low and indirect, to avoid glare on the computer monitors. Not much light lands there -- maybe about the same as a poorly lit (i.e. expensive) restaurant, and a good bit less than a lamp-lit living room.

In this environment, I photographed the Treos’ screens in turn with my Canon Digital Rebel SLR camera. The exposure is for the screen. I did not use flash. As you can see, the Treo 650 would record the cable mess on my desk, but the Treo 700p would not, could not, and didn’t. The better camera isn’t better in low light. The 700w, on the other hand, offers that neat little “brightness” menu, which when pumped up to its “3 ” setting would permit a picture – mostly by permitting some semblance of viewing something on its screen before clicking the “shutter.”

Indeed, the 700p camera isn’t sensitive enough to even show a picture on its screen, much less record one. The "image" stays dense and unintelligible. If you shoot anyway, the picture looks like you photographed a black cat in a coal mine at midnight. Only darker.

Much discussed in TreoCentral’s 700p forum, this problem isn't (yet) mendable by software, and it's not just a brightness setting. Don't worry, you didn't do it, and your 700p isn't broken. Its camera just isn’t up to the task.

Here’s another peek into my deskbound disarray, a giant (faux) flower that a fellow photographer gave me to “people-ize” my workspace. The flower has the same light source as the cradle pictures – a single hundred-watter across the room – but it’s not shaded by the monitors, so there’s a stop (two times) more light, albeit it dim and diffuse. It’s is a dismal lighting situation for all cameras, including the big ones.

A note about these example images. I reduced the composited images, and the color “balanced” ones are still a little rough.