There are some people that need to be on their headset all day. Whether it be for work, or talking with friends, or to be connected with a computer, these chatters are a special breed. I've talked to realtors who demand 12 hours of talk time for a single day. There are few good options for headsets this far up in the talk-time stratosphere. 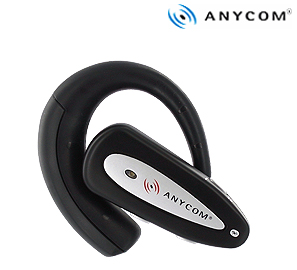 The battery is generally the heaviest component of a headset, and the HS-777 has a big one -- 330 mAH (for reference, the Treo 680 and 750v use a 1200 mAH battery). The Anycom is the heaviest headset that the TreoCentral Store currently sells at 1.12 ounces, though it falls somewhere in the middle in terms of size. In other words, it's a very dense headset.

The Anycom is deceptively comfortable, especially given its weight. The ear loop can be switched to either ear, and locks in place. When locked, it shows an 'R' or an 'L' to indicate the ear you should use for it. For the sake of comparison, I found it a more comfortable fit than the Motorola H700 or Plantronics Discovery 645 (with the ear loop). Initial comfort was similar to that of the Jabra JX10, though I found the HS-777 is more comfortable than all of them over many hours of use.

The Jabra BT250v and the Mr. Handsfree Blue Chameleon are the only over-the-ear headsets I own that were more comfortable. Of course, everyone's ears are different; your mileage may vary.

There are a couple of reasons the HS-777 is so comfortable. First, the battery is located within the earloop, so most of the weight is behind the ear. There's also no ear gel sticking into your ear canal. While the lack of a gel may slightly reduce volume, it does mean that I can wear the headset for extended periods of time without discomfort.

The headset looks like your standard classic over-the-ear headset design, though it's done well. The speaker is angled slightly towards the front. Many other headsets don't angle at all, and the difference in volume is notable. The angle also rests comfortably on the back inner pocket of the outer ear. The ear loop springs back towards the bottom of the back side of the ear to keep it in place. The springing action combined with the battery weight ensures that it fits very securely over the ear. I was unable to shake it free. 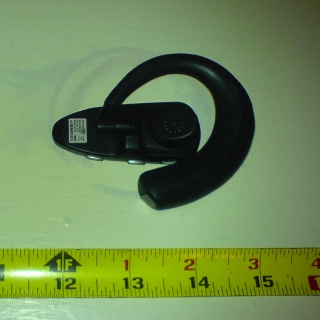 The call answer button is in the middle of the headset. The 'volume up' and 'volume down' buttons are opposite each other towards the front of the headset. I would have personally preferred that the volume buttons were next to each other on the same side, though that's a minor quibble. If a person is using this headset for 12 hours a day, they'll get used to it pretty quickly.

The headset supports call reject, redial, and mute for handsfree profile support. Like every headset that wishes it was R2D2, it has its own assortment of blinking lights, bloorps, bleeps, and brrr-doops when those functions are activated.

People I called told me the sound quality of my voice on the HS-777 is acceptable; it compares favorably to the other headsets in its price range. It gives my voice a deep and rich bass tone when paired with the powerful Bluetooth signal of my computer. With the comparatively weaker Bluetooth radio of the Sprint Treo 700wx, there's a little bit of a loss of treble tones or high end. This slightly affected the clarity of my voice; this would affect people with higher-pitched voices less. During calls, I didn't reveal that I was on a headset and had no complaints.

The sound quality I experienced was acceptable as well. The sound was clear enough. As with most headsets, I hear a small amount of persistent fuzz when paired with the 700wx, though I didn't have this issue when I tried the Anycom HS-777 with devices with stronger Bluetooth signals. Like most, this headset will be at its best quality when it has line-of-sight with the Treo and is within 3-5 feet of it, despite Bluetooth's claims of a thirty foot range. 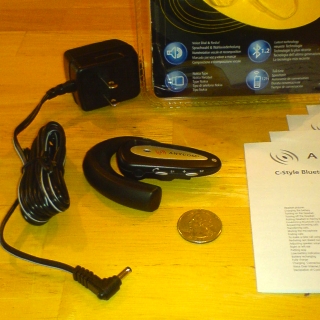 When I tested the Anycom HS-777, I tested it alongside several other headsets simultaneously. I charged the Anycom, and then started using with 4 hours of continuous talking, and then, using it the same way I used the other headsets, one conversation at a time. I used the Anycom over a two-week period. I'll be the first to admit, I don't spend a lot of time on the phone. However, I figured that I'd have to charge the headset up again at some point.

Well, I was wrong. After two weeks (336 hours!) of standard use, I have yet to run out of battery. I have yet to charge it up again. At some point in the future, the Anycom HS-777 will undoubtedly start blinking red. When it does, I'll still have 45 minutes of talk time left. I haven't seen it yet. This headset would also be ideal for casual talkers that don't want to worry about whether their headset is charged or not.

Overall, the Anycom competes well in its price range. It doesn't sound quite as good as the Samsung WEP 200, my favorite headset in the $50 range. I haven't found another headset that does though, and you certainly don't get 12 hours of talk time out of the tiny Samsung.

If you are looking at a more popular headset such as the Jabra BT250v, you might do just as well checking out the Anycom HS-777; you'll certainly get more for your money. If you need to talk on a headset all the live- long day, the HS-777 is a surprisingly comfortable and long-lasting option.