Every now and then, you discover some neat kernels of information while poking around with a product - tricks that don't make their way into its manual or a review, or something that has already been reviewed is updated or expanded in such a way that deserves mention but not a full blown write-up. In this edition of TreoTekniques, we'll cover some of the neat new features and cool ways to use products were recently featured in TreoCentral reviews.

Tooling Around with the Neuros

The Neuros MPEG4 Video Recorder 2 Plus 2 is one of the most intriguing products we’ve seen lately, and if you haven’t spotted yourself one yet, it may be time to give it another look. If you are one of the lucky Neuros owners, you may have noticed that it generates a thumbnail file on your SD cards for each video you capture. These files, with the extension ".THM" are used both to generate a screen grab on the Neuros during playback mode, and on the SONY PSP during file selection.

Unfortunately, your Treo doesn’t do anything with the thumbnail files at all, but that shouldn’t be reason enough to delete them. In fact, if you trash the THM files from your SD card, the Neuros will sit and fiddle around with itself for a moment or two generating a temporary thumbnail, which means that if you wish to play back videos on the Neuros, you need to back up and archive the thumbnail files as well. In other words, besides popping the SD card out of the Neuros and into your Treo to watch recordings in your hand, you'll probably move the files off the card to your computer or laptop too, then erase them off the SD card to make room for more, but later, if you might want to copy them back ONTO a card and play them on your television with the Neuros.

When you do offload recordings to your computer, you'll probably rename the movie or television show's filename from the nondescript “M4VXXXXX.MP4” style name the Neuros gave it to something recognizable, such as “Nothing But Trouble.MP4”, but when you do, make doubly sure to copy over and rename the corresponding thumbnail file to match, thus “Nothing But Trouble.THM”. Doing this ensures that if you re-load your favorite TV show back onto your SD card, you have the corresponding thumb file to match and load along with it. Don’t forget to leave the highest numbered .THM file on your card though, as the Neuros uses its file name to continue incrementing in sequential numbers (e.g. M4V000005 -> M4V000006.MP4) when recording new files. 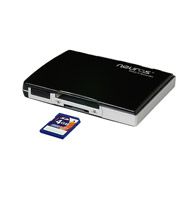 If you’re feeling creative, it’s also possible to make your own custom thumbnails to keep along with your videos, which is especially useful if the original thumb is something that is un-useful to the file associated with it. Imagine if you record “Alfred Hitchcock Presents” and wind up with a THM file showing a commercial for Scotch Guard. (Television broadcasts almost never begin right on the tick of the hour or half hour or whenever a cable box's guide says it will, and when you set a Neuros timer to, say, 9pm, you'll often capture the tail end of a commercial before the show or movie titles begin).. If you’re feeling really into your work, you could go online and find an image of the packaging of the cover art from a DVD for the show or movie you're recording and turn it into a thumbnail instead.

This is how it works: All of those Neuros .THM files are really just JPEG files in disguise. To make a custom version, load any JPEG image into your choice of graphics editing program—Adobe Photoshop, for example—and choose the resize option.

To turn it into a Neuros .THM file, it needs to be specific dimensions: 160 pixels by 120 pixels with a resolution of 72 DPI. Compression isn’t a big factor, so use low to medium settings to keep them tiny, and make sure to use Baseline compression and not Progressive Scan when you save the file. Lastly, make sure to name the file exactly the same as the corresponding Neuros video file it belongs to, and when you are done, change the extension from .JPG to .THM. Voila! Now you can feel like a champ and show off your new leet skills to your pals when they come over to brag about their TiVo(s)! 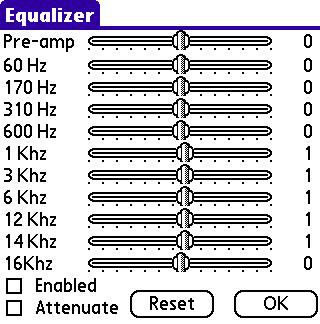 What’s new in the world of Treo software? A lot, I can tell you. One program that’s always on the move is TCPMP. Its new commercial cousin, CorePlayer is taking the handheld computing world by storm, but if you’re not yet up for buying the latest commercial version and prefer to , there’s still room for improvement. The latest version of TCPMP, v.0.72RC1 has a built in 10-band Graphic Equalizer, plus the ability to rotate movies from landscape to portrait if you ever desire to do so. There’s also a setting to over-ride the built-in Battery Manager to prevent auto-turn off when your Treo’s battery gets low. Instead, your Treo will keep playing until the battery is totally depleted, which is a cool addition if you’re just lounging around and don’t need to make any calls in the near future, but you might want to carry a spare battery just in case.

Don’t forget to install the AAC audio plug-in for TCPMP if you’re Neurosing your own videos, as without it you won't get any sound when you play .MP4 files. This plug-in is not on the main corecodec.org site because of legality concerns for distribution, but you can find it floating around on the net in a lot of places.

mOcean is on the move too; version 2.5.1 has some cool new features like the new Sync option, which allows you to synchronize your Treo with any iTunes music list on either your Windows PC or Mac. Brilliant! MotionApps even added a lot of bonus Treo-specific features such as full keyboard support for moving around in playlists, or using the space bar to pause/play tracks. mOcean also lists tracks alphabetically in Artist or Album view modes too, so you can find those tricky-tracks faster and without having to roll around through two hundred songs. Nice.

It’s a blast to see this pair of cool apps making good progress, but that’s not all by a long shot.

BinaryClock just hit v2, which improves on some of its basic functions, offering new ways to view the date and timestamp, plus it includes modes better suited for WristPDAs.

Tamoggemon also says that an updated version of FileFind is coming soon, hopefully with major fixes, plus they have some other programs in the works to make your Treo-wielding life easier.

So if you haven’t checked out the updated versions of these neat products, now is a good time. Although new version upgrade policies vary from one software developer to another, in many cases you're entitled to free version upgrades of programs you've purchased, or discounts if a title goes from freeware to commercial, so take advantage of these opportunities since upgrade discounts often have a cutoff date.